I have a silly notion in my head to run at least 3 miles, every day, for the month of July.  I don't plan on running every single day without a day off ... I just want to average 3 miles a day, so sometimes it means running more than that.  Since I won't be running Saturday and Sunday this weekend, I wanted to "make up" my miles ahead of time and set out to run 8 miles today.

Normally I have no issues with running this many miles.  Except today I started at 9:15am which made it really hot and humid already.  I carried a small 8 ounce bottle of water with me to help with hydration since there weren't any water fountains on my route.

Afterwards I jumped in the pool fully clothed and tried to cool down before attempting a shower.  Usually I wouldn't be in such a hurry to make myself presentable, but I had a fingerprinting appointment for a substitute teaching job at Anderson's preschool.

Of course I get to my appointment too early and notice a Cuban restaurant a few stops down in the shopping center.  I had never heard of Heber's Cuban Café but decided to give them a try for lunch.

I'm not sure what the reasoning is behind it, but the restaurant doesn't sell pork products.  If you've ever ordered a traditional Cuban sandwich you would know that there is sliced pork along with ham on it.

Cuban regular, 6 inch
Turkey Ham, Turkey Breast, Pickles, Mustard, Swiss Cheese & Potato Sticks.
I decided to give it a try ... who could mess up a sandwich? 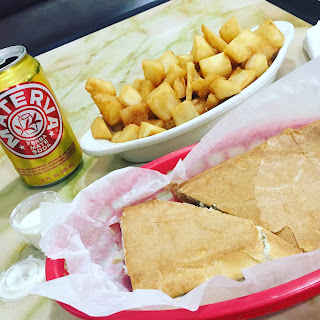 It wasn't a bad sandwich ... it just wasn't a Cuban sandwich.  Hopefully this place has other menu items that are more authentic, otherwise I'll just go to one of the many other Cuban restaurants in Orlando.  The fried yucca was good as was the sugary Materva I washed the meal down with.  Also what's with the fried potato sticks?  Those are usually found on the Cuban burger, the frita, but I had never eaten them on just a regular Cuban sandwich before.
﻿
Posted by Jess at 3:26 PM