Well ... Anderson turned ONE year old on Saturday March 5th.  We celebrated the milestone with a fiesta at our house.  We invited some of his friends (ie. Mason's friends and their siblings) and were lucky to have my parents in town as well. 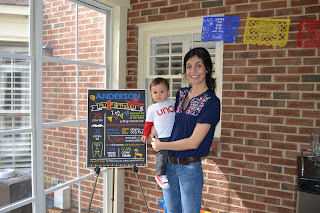 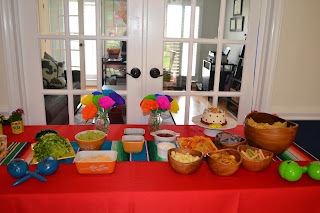 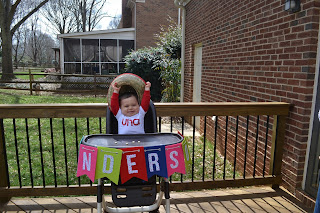 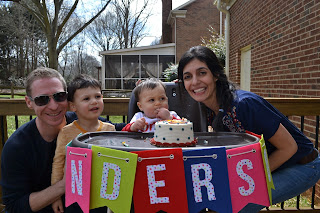 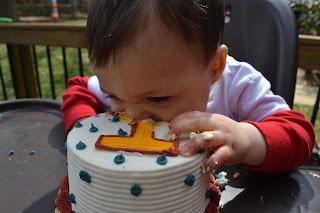 We even got Anderson a vegan cake from Whole Foods so that he could enjoy diving face first into it.

Another big "first" was Anderson's hair cut a few days before his birthday.  Although Ryan and I trimmed his hair back in the summer when he was losing all of it, this was his first official haircut at a kids salon.  He rocked it and was so patient as the stylist cut his hair.

The Monday following his birthday he had his wellness check at the doctor's office and received 3 vaccines.  We are so happy with the progress he has made with gaining weight. It's hard when there are so many foods that he can't eat due to allergies.

He has a total of 4 teeth poking through the top and 4 poking through the bottom.  We are off formula and drinking hemp milk 4 times a day by bottle.  Anderson is drinking water from sippy cups but hasn't mastered the art of swallowing the water and not spitting it out all over his shirt. 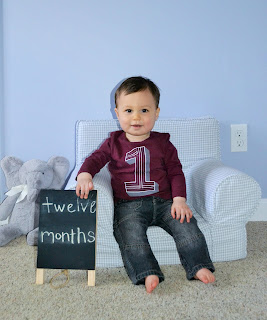 He eats solids like a champ and has on occasion 1 pureed bowl of vegetables a day.  Otherwise I cut everything up for him into little cubes and he feeds himself.  Still loves sweet potatoes and peas the best.

He teeters from one to two naps a day and at this point I would rather him just have one massive nap in the afternoon.  We are working on this and yesterday he rewarded me with 2.5 hours of glorious napping.

Still no walking but lots of pulling and taking steps if he's holding onto something.  Says mama and dada and what sounds like "hey" when we walk into the room.

He's so happy all of the time and makes us smile with his goofy grins.  I love you so much Anderson and can't believe you're a toddler!
Posted by Jess at 1:14 PM