Two years ago I ran in the first ever Know Your Craft 5k.  I finished the race in 22:25 minutes and placed 3rd overall among the females.

On Saturday I ran the race and finished in 22:25 minutes again!  Talk about consistency.  Out of 655 total finishers, I finished 63rd and 12th among females.  This time I placed 2nd in my age group and received a pint glass and a gift card for a local running store as my award. 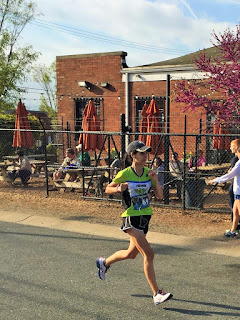 Since the race began at 9am Ryan and the boys were able to tag along with me.  They dropped me off near the start line and then went to find parking while I was running.

Ryan was able to control both boys and snap this great action shot of me finishing the race.  I started off the race pretty strong and finished mile 1 in 6:58 minutes.  I finished the 2nd mile in under 14:30 minutes and still thought I had a decent shot of PR-ing.  By 2.75 miles I felt like throwing up and kept dry heaving as I was running.  I slowed down considerably but somehow managed to finish in 22:25 minutes.  As soon as I crossed the finish line I walked off to the side and threw up behind a car.

Once I threw up I felt a ton better and was ready to drink my pint of beer from Triple C Brewery.  Hey, whatever works right?

Mason stayed with me while we waited for the awards ceremony and Ryan headed home with Anderson to grab Mason's t-ball equipment for his practice later in the day.

It's a great race and definitely one I'll continue to run.  The shirts were awesome this year and the free beer at the end of the run is spectacular.

I made sure to keep up with pre-race tradition and had Bad Daddy's take out the night before.  Mason was a train wreck so we knew better than to take him out in public for my cheeseburger.  Instead I called in our usual order and we picked it up from their Ballantyne location.

I stuck with making my own burger and chose American cheese, whole wheat bun, with pickles and onions and a side of garlic mayo.  I wish there was an option for burger size because these are honestly just too big.  I could barely finish it and felt super full by the end.  I didn't even finish the tater tots, but Mason helped me with those. 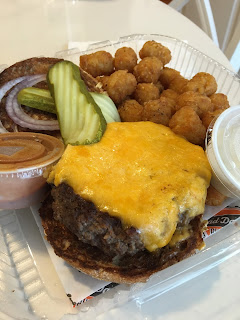 Just another day of running for a cheeseburger!﻿
Posted by Jess at 8:13 PM