On Saturday August 29th, I ran the Sundae Run 5k.  The race was located about 5 miles from our house and didn't start until 9am which made it an easy pre-race morning.

Tradition states that I must eat a cheeseburger and drink a beer the night before a race ... the Sundae Run 5k was no different.  We went to Smashburger where I ordered their "big" Classic Smashburger, no tomatoes, and split a side of French fries with Ryan.  It was washed down with a Fat Tire amber ale.  So tasty!

The morning of the race I drank 1/2 cup of coffee and had a slice of toast with almond butter.  We headed off to the race as a family and got there about 30 minutes early so that I could pick up my packet.

I wasn't sure what to expect and found that the race was smaller than I had anticipated.  It was held at a local middle school which was pretty cool since the start and finish happened on the track.

I lined up near the front of the pack and started off a little faster than normal.  I finished mile 1 in 6:51 minutes and was disappointed to see the hills in mile 2 and 3.  Somehow I dragged myself to the finish and ended the race in 22:08 minutes.

This time was good enough for 4th overall female, 1st place female 30-34.  The award was a plaque which was a nice change since most races don't give out actual awards.

Instead of the normal post-race snacks (bananas, bagels, and granola bars), this race featured a make your own ice cream bar.  Mason and I split a huge bowl of cookie dough ice cream complete with sprinkles, marshmallows, and gummy bears.

This was a great race that benefitted the local community.  Lots of families came out to participate which made it feel laid back and fun.  I would totally do this race again next year!
Posted by Jess at 7:34 PM No comments:

Things get pretty real when you realize your half marathon is 6 weeks away.  My longest run has been 8 miles which means I need to find the motivation to run another 5.1 miles.  I'm planning on doing 9 miles this weekend and even enlisted Ryan to buy me a couple of Gu's to use as fuel.

I hadn't been using a training plan but just googled a couple of different ones and think I'll try to follow Hal Higdon's novice 2 training plan for the remainder.

Since I'm doing a 5k on 8/29, I'll just swap weeks 6 and 7.  I like this plan because there are 4 days of running, along with 1 day of cross-training, and 2 days off.  With such an increase in mileage I'll definitely need those rest days to avoid injury.

I ran 4.2 miles on Sunday, 3 miles on Tuesday, and 3.1 miles yesterday.  I took today off and will probably try to run tomorrow or take a class at the Bar Method.  Looks like I'm right on track!  As the weeks tick by I'll put more thought into my goal finish time for the race.

On August 8th I ran the NC Music Factory 5k Rock n Run.  Race start was at 8am which made it easier for my little family to come along to cheer me on.  I picked up my race packet the day before which made it super easy to just get to the race a few minutes early.

In case you were wondering I followed pre-race tradition and ate a cheeseburger the night before.  We went to Bad Daddy's where I ordered a pimiento cheeseburger on a wheat bun, along with sweet potato fries, and a large Captain Jack beer.  Can't fool with what works right?

I wasn't really sure what to expect during this race since it was my first time running it.  I was pleasantly surprised to find that most of the course was flat (for Charlotte standards).

Seeing my boys near the finish line always makes me push myself harder for those last couple of yards.

Although we didn't stay for the awards ceremony, I was happy to find out I placed First in the Women's 30-34 years old division.  Love when that happens!  Due to some mix ups at the awards ceremony, my award is going to be mailed to me ... at some point.  I am curious to see what it is.  I also won a gift certificate to an hour long massage that is also being mailed to me.


All in all it was a great race and I would definitely run it again in the future!
Posted by Jess at 1:56 PM No comments:

Oh what a month!  We really struggled in July ... things with Anderson's eczema just would not get better and after a series of pediatrician appointments and one with an allergist, it was determined that I would no longer breastfeed.  The alternative is not my favorite since I'm a granola-eating hippie, but if it's for the betterment of my child then I'm all for formula feeding.

After not having much success with Nutramigen (there is still cow/dairy protein found in there) we made the switch to Elecare (amino acid based).  Anderson had vials upon vials of blood drawn at his allergist appointment and they discovered he had allergic reactions to wheat, dairy, eggs, soy, nuts, and soy.  I tried to eliminate those from my diet for almost 4 full days but after seeing soy listed as an ingredient in my prenatal vitamins I about lost it.  It was just too hard for me to eliminate ALL of those food items and potentially STILL eat something that I shouldn't.  I honestly felt like I've been poisoning him this entire time ... which is a very dramatic way to look at things.

It'll be one week of formula feeding Elecare on Saturday and I've read that it can take up to 2 weeks to see full changes in the baby.  What we are looking for is LESS ITCHING.  The poor kid is on his 3rd type of allergy/antihistamine and cannot find relief for the life of him.  We've done it all ... cotton clothes, new free and clear detergent (The Honest Co.), bleach baths, not bathing everyday, several layers of Vaseline or Aquaphor slathered all over his body, and he's still scratching himself all the time.  He's so itchy that he tore the skin so badly on his arms while using his car seat as a scratching post; his doctor compared the lesions to 2nd degree burns.

Oh and the sleep ... the lack of sleep.  Imagine being so itchy that you can't get comfortable.  He's waking up every hour looking for relief and I can't give it to him.  It's heartbreaking.

This past month did bring a few (random) nights of 5-7 hour stretches.  He even slept 10:30p-7:30a one random Tuesday and 8p-6:15a two days later.  We have no idea how or why but have failed to replicate those nights of sleep.

One a bright note we introduced sweet potatoes to his diet on Monday and the kid loves them.  So far no allergic reactions to them which makes me excited to introduce another vegetable this weekend.

His hair is growing back so that's a plus I guess ... and even through all of these trials and tribulations, the kid smiles and laughs at us.  Especially at his crazy big brother. 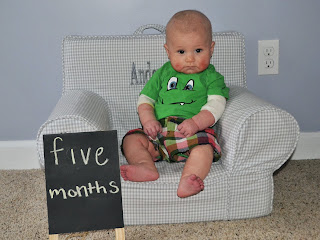 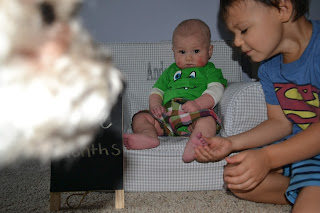 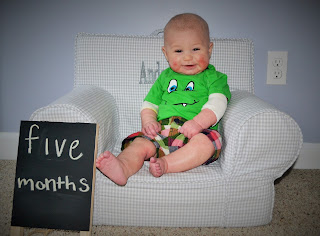 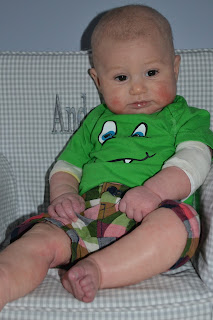 We love you Anderson and love seeing you grow!  At one of the most recent doctor appointments you weighed in at 15 pounds ... you weren't gaining weight for a couple of weeks and had even lost some weight since your 4th month appointment.

Fingers crossed the new formula is the key in solving the itchiness issues and we can enjoy the next month!
Posted by Jess at 3:19 PM No comments:

The day wouldn't wait for me

Last night Ryan and I did what most neurotic, exercise-centered people do, and plan out our workout for the next day. Ryan took the "holy crap it's still dark out" shift and I said I would run when he got back from the YMCA so I could be showered in time to make breakfast for my hungry crew.

It all seemed like a good plan until I found myself in Anderson's room at 9:30, 10:45, 12:00, and finally around 1. Mind you he only ate one of those times ... The rest was spent rolling back and forth being super uncomfortable as I tried to shove the pacifier in his mouth.

By the time Ryan's alarm went off at 5 and he finally got up at 5:15, I figured I would not be doing an early morning run and would just try to get a few more minutes of sleep.

Then Anderson woke up at 5:30 to eat. Sigh. I fed him and got him back to sleep, as he stared at me smiling. I know it's not his fault that his eczema is so severe that he's on his third allergy medication, an antibiotic, and a new kind of formula. But it's taxing and exhausting and pockets of sleep are not sustainable.

As I got back into bed I saw Ryan's text saying he was on his way back home. I told him I was skipping my run and going back to sleep. But the more I thought about it I realized I wouldn't be able to fit in a run any other time of the day. With a looming race on Saturday I knew it was now or never. I dragged myself out of bed and wrote Ryan back that I changed my mind and would run. I was laced up and ready to go as he entered the garage and we handed off the babysitting baton so to speak.

I ran while the moon looked on and lit the way for me in the otherwise dark street. On the way back from my short 3 miles, I saw the sun rise and paint the sky a pretty pink and purple.

I huffed and puffed my way inside the house when I was done and was greeted with ice cold water from Ryan and the announcement that Mason was already awake.

It was just 6:45am for god sakes! But I was right, the day wouldn't wait for me to get my act together. Tired or not the day had started and it was time to get going.