Jogging with Kelly and Michael

On Friday morning I made it to the gym in time for the Live! with Kelly and Michael show. I usually don't watch morning shows but figured it might be an easy way to pass the time while on the treadmill.

Liam Hemsworth was one of the guests. I didn't realize he was so young ... Compared to me I guess. Only 23 and has done so much. And has a cute Australian accent.

If you haven't seen the Hunger Games you totally should. It's a good movie AND Liam is in it :)

Over 90 minutes of cardio

Yesterday I did more cardio in one afternoon than I've done in a long time. I took a nice brisk walk with my friend Shane along the greenway. We walked for an hour and did just under 4 miles.

Then I braved the crowded mall to make a few returns and then drove to the YMCA to run a couple of miles on the treadmill.

My legs were a little tired from all of the walking so I only jogged a little under 3 miles in 35 minutes before the treadmill shut off.

I'm so lucky to have been able to sneak away to the gym for a run on the treadmill while Mason naps.

Unfortunately I noticed a super strong lower back pain begin as I started jogging. It actually hurt more as I slowed to a walk than while I picked up the pace. I didn't want to make my back pain worse so I kept the run pretty slow and finished 4 miles in 50 minutes while watching "Home Alone 2."

I did find myself startled a handful of times by the angry male runner next to me. Every 30 seconds or so he would punch the treadmill screen angrily. Then he would prance and skip instead of running. It was super bizarre and I definitely shared a few confused looks with other gym goers.

Goals change, then change back

There was a point years ago where I thought running 500 miles in one year would be such an exciting feat (feet lol) for me as a novice runner.

Then I achieved that goal and wanted more. So I set my sights at 750 miles in one year and reached that milestone a few days ago with time to spare in 2013.

So what does an ordinary person do? Quickly change their goal to more miles for this year.

But then things happen. Mason was terribly ill yesterday. The poor kid woke up and never stopped vomiting as the day went on.

Six loads of laundry later plus a ton of baths and our day had finally come to an end. Ryan and I hoped that our little man would wake up this morning feeling so much better but instead he woke up crying around 5:30am which is almost two hours earlier than his normal wake up.

Since then I've had a huge cup of coffee and Mason has kept down a few Cheerios and some plain toast.

We've read all of his books at least once and have tried to stay nice and still in his bedroom in hopes of keeping down his breakfast. So far so good.

He seems to be in better spirits and that makes me happy. But sick toddlers make it hard to get runs in and I think my latest goal may go by the wayside. Which will be ok. One achieved goal is better than nothing. And one toddler that is feeling better makes it all worthwhile.

The scariest treadmill ever

On Friday I brought Mason to the gym with me so that I could use the treadmill and he could be watched by the daycare folks.

All of the "normal" treadmills were taken so I jumped on the Woodway.

Holy moly was this treadmill scary! I only ran for 0.25 miles than walked another 0.25 miles for fear of falling off that thing. There is no wall in front where your feet go so I kept thinking I was going to walk right off it.

Fortunately I found a normal treadmill after my measly 1/2 mile and finished another 2 3/4 miles.

Do you have a favorite treadmill at the gym? Wish I could solve my treadmill woes by having my very own one at home.

After many months (years?) of not running in Florida I finally got a chance to enjoy a leisurely jog. I cannot believe it is mid December and I just ran outdoors in a sports bra and shorts.

We are so lucky to be staying at a beachfront hotel in St. Petersburg. Although a little windy, my 3.5 mile run was exactly what I needed. Looking forward to a few more Florida runs before heading back to chilly Charlotte.

What to do after a rainy run

This is a late post ... But aren't they always?


Last Thursday I set off to do my run after dropping Mason off at school. It was gray and cool outside but had stopped raining. I began running and was amazed by how many wet leaves covered the sidewalk. I tried to run slowly and carefully for fear of falling and hurting myself (again).

After about 2 miles it began raining ... Not sprinkling but full on rain. Since I usually do an out and back I had no short cut back to my car and had to run the same 2 miles back.

I ran 4.40 miles and arrived back to my car wet and cold. My solution was to head to Sunflour bakery for a crossiant sandwich, hot coffee, and cupcake.

I love these sandwiches! Hot, buttery, and irresistibly sinful.

I then headed for a much needed pedicure. There's nothing better than someone else massaging your feet after a run. Thanks lady. 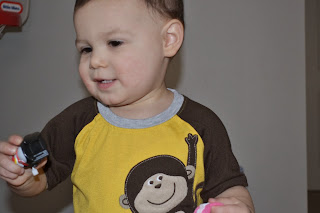 ... and this month's Mason's update is late.  No surprise there.  I was a little distracted by Thanksgiving so bare with me as I try to catch up. 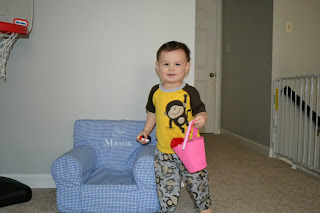 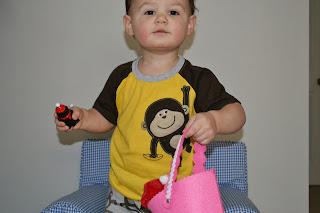 At times he acts like such a big kid, but can easily turn into a little boy when he says "up" to me so that I can carry him.  Tantrums happen all the time which are still quite comical.  We've begun to institute time-outs, 2 minutes at a time, for things such as hitting Honey, hitting us, biting us, biting the couch, throwing the remote control down the stairs ... you know the usual toddler antics. 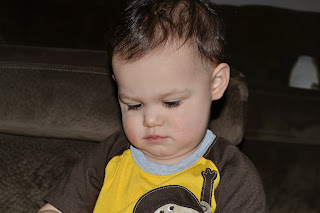 He still asks for dada all of the time, even when Ryan is just a few rooms away working.  It's especially tough when dada is out of town, for all of us.  After his nap I'll sneak him over to Ryan's office where Mason will give him the biggest hug ever.  It melts my heart to see him be so loving and gentle.  He also asks for Honey as soon as he gets into the car after school.  Now that he can say her name it's truly the cutest thing in the world when he looks for her.

I'm worried about our long drive to Florida but what can you really do?  Hopefully Mason will sleep through part of it, although I'm not counting on a peaceful drive.  Sigh.  I wish we had family closer but I'm always reminded that WE were the ones who moved away from Florida.

"I Got 5 on It" is a hip hop song by hip hop duo Luniz, taken from their album Operation Stackola.

But I'm using this catchy song lyric in reference to all of the 5 milers I've been running lately. I ran 5 on the treadmill on Monday and ran another 5 this morning outside. I'm super stoked that it "warmed" up and that I was able to run in 48 degrees. This Thursday should be even warmer so as long as the rain stays away I'll be doing another 5 miler outdoors.

Check out our new treadmills at the gym.

- Posted using BlogPress from my iPhone