one of the many things that I've learned since having Mason is that sometimes planning and scheduling goes awry.  he's also showed me that you can never have too many bibs or burp clothes lying around ... but that's another post.

I really want to run the half marathon on September 23rd.  Like really really want to.  I think training for it will keep me motivated to work out.  I would also love to see how I do 6 months after having a baby.

I have no doubt in my mind that if push came to shove I could run 13.1 miles in 8.5 weeks.  It might not be pretty, and there would probably be some walking breaks, but I know I could finish.

anyways ... I had every intention of running today.  I was going to strap Mason into the BOB and knock out a couple of miles before it got to warm out.  Then he practically threw up all of his food onto me.  Normally I wouldn't be fazed by this but he's done this almost every day for the past week, during almost every feeding.  Plus he keeps making this sad coughing, "I think I'm going to choke," sound.  I really need to STOP googling every little symptom but from what I've gathered this might just be reflux.  Or he could possibly be sick.  Instead of dragging my poor son outside for 20 minutes in 80+ degrees and super humid conditions, I think I'll pass on the running today and just let him rest.  Which in turn means I get another rest day (yesterday we didn't run either). 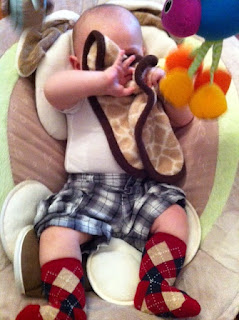 and yes I dress Mason in ridiculous combinations sometimes.  it's not like we're going out in public so black plaid cargo shorts and red argyle socks seem appropriate.

back to the half marathon and my thoughts on training.  ideally I would have 12 solid weeks of training before the race.  at this point I'll take what I can get, which is why I found this 8 week training plan.


My immediate thoughts are to do my long runs on Saturday (which is what I'm used to) instead of Sunday.  During training for my last 2 half marathons I never reached the recommended long run distance prior to the race.  I know if I can train up to 9 or 10 miles, I'll be able to knock the rest out on race day.

This Saturday I'm going to attempt to do 4 or 5 miles on the treadmill to (once again) ease back into it. With the above training plan I know I don't technically have to start training until the week of August 6th.  That's based on the assumption I've been running at least 15 miles a week ... which I haven't been.  The next 2 weeks will be all about getting my weekly mileage back up to that point.  Unfortunately most of my runs will have to take place indoors at the YMCA on a treadmill if the weather doesn't start cooperating.  I'm OVER this heat wave ... I guess it's safe to say that it's not just heat wave, but what most consider the season of SUMMER.