Yesterday Mason turned 3 months old.  Since his next doctor's appointment isn't until the 4 month mark I took it upon myself to take really unscientific measurements of his weight and height.

These are total approximations (weight was done holding him on a scale then subtracting what I weighed without holding him): 16 pounds

(height was done while he laid down on the bed and measured with a toolbox tape measure): 25 inches 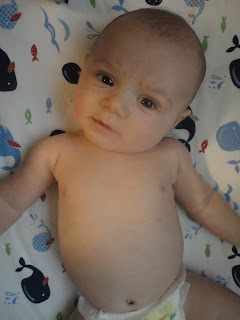 He's still sleeping in his crib using the swaddle, although chances are that this will end soon once he starts rolling over.  Some nights he sleeps up to 6.5 hours at a time which is a huge improvement.  Other nights he still wakes up every 3.5-4 hours which is not as fun. 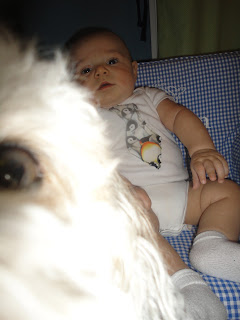 We did our monthly "I'm wearing a onesie with a tie" photo shoot and Honey was very eager to participate. 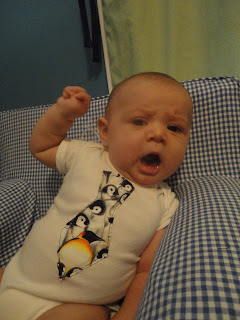 Mason wasn't all that thrilled with posing for so many shots. 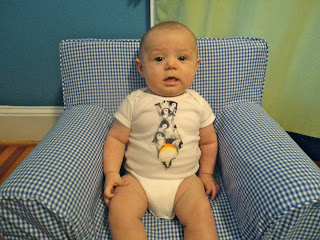 He smiles and "talks" and holds his neck up for what seems like a long time.  He's growing up so fast!  It's amazing how different he looks/acts on a daily basis.  Some people are finally noticing a resemblance between me and my monster.  We don't have an exact schedule yet but he's eating, playing, and sleeping in that order.  He took his first vacation last weekend to Savannah, GA and was awesome being in the car for the 4 hour car ride.

Looking forward to what the 4 month update will be!
Posted by Jess at 2:44 PM