a cold, some rain, and no motivation

I hate being sick.  Know what I hate more than being sick?  Being sick and taking care of a sick baby.  At least I'm assuming Mason is sick too ... he sounds like Darth Vadar, keeps coughing/sneezing, and has been non-stop fussy for days.  Poor guy.  But who gets to say "Poor Jess?"

After coming off a 6 day running streak last week I found myself on Sunday feeling all the signs of a cold ... congestion, achy body, and a headache that would not go away.  Think I did any running or working out?  Naw.  Let's move on to Monday (yesterday).  Think I felt any better?  Not really although my congested head/nose started to turn into a runny (ha ha) nose.  At least my body was doing some-sort of RUNNING.

Now it's Tuesday.  I've spent most of my morning in bed with Mason.  While that sounds ultra relaxing it's really not.  So much focus and attention goes into watching a baby ... especially one that doesn't feel well.  It's hard being alert when all you want to do is crawl back under the covers and sleep off the sickness.

Oh and to top it all off it's been crappy rainy weather since Sunday.  Guess it fits the mood around here. 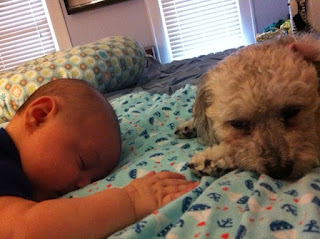