On Saturday morning Ryan, Mason, and I headed over to the Carolinas Care 5k at the McAlpine Creek Greenway.  The race start was 9am and I had forgotten to pre-register so we arrived around 8:40am.


After paying and handing off my race packet to Ryan I stretched and wandered over to the starting line.  This was a very small local race and there weren't a ton of runners present.  The timing was also done without chips ... instead you were handed an index card with what place you finished as you crossed the finish line, and a person wrote down your information.

Most of the course was on loose gravel through the park.  There were some steep uphills (and subsequent downhills) that were hard to deal with, especially with the slippery ground.  I managed to finish the first mile in 7:30 minutes and then the second mile in 15:55 minutes.  I saw Ryan and Mason two different times during the race which helped keep my spirits high.

I crossed the finish line in 24:30 minutes and didn't really notice what my place was among the other runners.  After grabbing my usual post-race snack (banana and water) I headed back to our car with Ryan and Mason.
Once I was home I sampled my first protein drink from Premier Nutrition.  They graciously sent me an awesome sample package and I haven't had a chance to try everything yet. 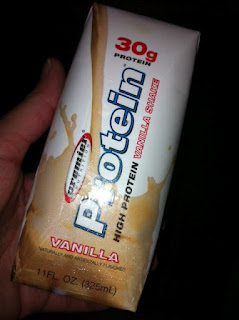 The drink was super yummy and totally hit the spot after exerting myself during the race.  I loved the vanilla flavor and can't wait to try the chocolate flavor soon.

Hours later I received a tweet from someone that had said they heard my name called during the award ceremony.  I was bummed that we hadn't stuck around for the awards ceremony.  I emailed the race director and was told they had my medal and I could pick it up whenever I had a chance.  Score! 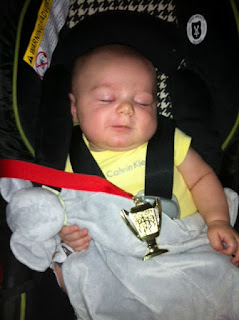 I placed 3rd in my age group with a final time of 24:30 minutes.  Definitely not my best time but still something to be proud of.  At least my biggest fan is proud of me :)