I had just posted about Mason being one month old on Monday but figured that I could do a quick 5 week update as well.

After his doctor's appointment on Monday Ryan and I decided to take heed to what the doctor had said, and try to stretch out Mason's feedings to closer to 3 hours apart.  Let me just say that Mason was not a big fan of this decision.  As a result we've had a pretty rough couple of days.  Today wasn't as bad, but then again, the nights are always worse.

A couple of developments during the 5 week mark are (according to Babycenter):
- stronger neck muscles, which allow him to hold his head up for short periods (we've noticed him doing this during tummy time)
- first real smiles (Mason has definitely smiled at me a couple of times ... or it could have been gas)
- sleeping longer through the night (which we have NOT seen yet ... the most he's gone is 3 hours) 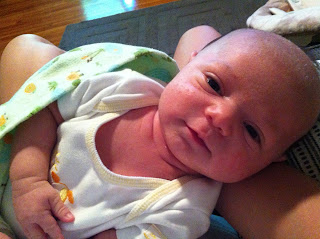 On the bright side ... He loves going in the jogging stroller and is so good at restaurants and bars (just like his dad).  It's so interesting to see him grow into a little person full of quirks and personality traits.