The past couple of days have been filled with running a lot of errands.  Does that count as actual running?  No?  Didn't think so.  It's kept me way more active than my original "stay at home mom" title suggested.
Mason, for example, has been taken to the doctor's office 4 times in a little over 1 week.  Last week both visits were to measure his weight gain.  Yesterday I took him to the doctor's to get checked out since he sounded super congested and possibly sick.  Fortunately he did not have a cold but the doctor suggested buying a cool mist humidifier to help clear his tiny nasal passages.  That required a trip to Target to purchase:
Crane Ultrasonic Cool Mist Penguin Humidifier - fortunately for me this one had some of the best reviews online and was one of the least expensive options 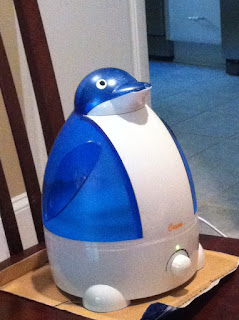 Yesterday also brought me to Alex's apartment to do a couple loads of laundry since our washer has been broken since Saturday.  Do you know how inconvenient it is to have a broken washer and a newborn?  Not to mention the fact that the repair man said it could take up to 2 weeks for the repair due to an ordered part.
This morning I took Honey to the vet to get a shot then dropped her off at the groomers for a much needed hair cut.  I'm not digging her new look but I guess it's better than being the smelly dog. 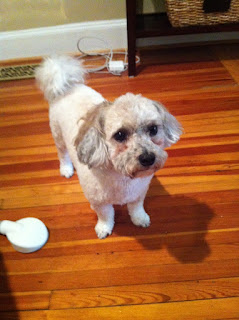 After dropping Honey off at the groomer I got a phone call from Mason's doctor's office saying that the hospital had incorrectly done some blood work while we were there.  So it was back to the doctor's office for a prick in the heel (poor little guy cried). 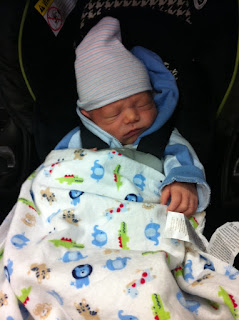 And now I'm waiting for Mason to wake up so I can feed him for the 100th time today.  Ah the joys of motherhood :)
Posted by Jess at 3:18 PM