Mason is now 4 weeks old!  This past week has been a little rough for all of us around here ... he seems to be staying awake longer during the day, but isn't really sure what he should be doing with that awake time.  So I've been trying to entertain him and make sure he gets plenty of "tummy time."  I think all of the extra awake time has finally prompted me to take naps ... or at least 1 nap today for an hour.  It was a much needed hour of rest!

Your baby can probably focus on and track moving objects now. Try giving his new skills a workout by slowly passing a toy in front of his face or by having a little "staring contest" during which you walk slowly back and forth in front of him. Watch how his eyes lock with yours and follow along with your movement. This skill is a building block for hand-eye coordination, which will come later. 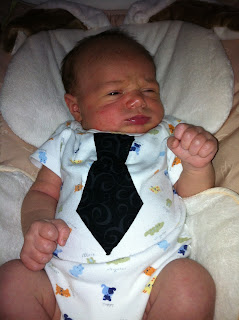 He's quite the little character and makes some silly faces while he's awake.

We've also taken him on a few walks with the baby jogger.  Hopefully I'll start jogging with him next week, but until then I've had a good time jogging solo.  Today I was able to go out for 2.5 miles and even managed to have sub 9 minute/miles.  There is hope for me yet!

I'm still holding onto those last 8 pounds of baby weight.  I wish I could say that each boob weighs 4 pounds from all of the milk but that's probably not true.  I probably haven't lost any weight this week from all of the desserts and sweets I've been trying to shove in my mouth consume.  Starting May 1st I'll turn my eating habits around and hopefully have some more running and exercising done as well.  Fingers crossed for a motivated Jess.