I haven't been so ambitious with working out in a long ... long ... time.  This morning I woke up at 5:30am to get ready for a 6am hot yoga class at the YOGA ONE studio.  I had just finished feeding, changing, and putting Mason back to sleep at 4:45am so 5:30am came rather quickly.  Although the thought of staying in bed and sleeping another 30-45 minutes until Mason ultimately woke up again went through my mind, I opted for sucking it up and getting ready for the class.

Normally I would just change into my yoga outfit, grab a bottle of water, towel, and mat and head out the door, but unfortunately things aren't so easy anymore.  I ended up using the breast pump to have some food ready for Mason so that Ryan could feed him while I was away.

Class was great ... really hot and really hard.  There were numerous times where I had to stop the current position to take a rest, and felt like my pride was handed to me by the time the class ended.  I know eventually it'll come back to me, but for now I'll just deal with the fact that my whole body will be sore by the end of the day.

Can't wait to go to another class hopefully this week!

Once I got home I made myself some breakfast. 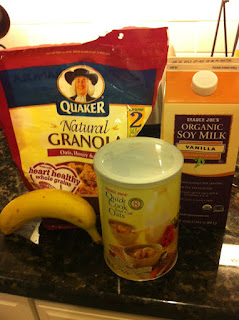 I heated up some steel cut oats and mixed a cut up banana, handful of granola, and some vanilla soy milk into the bowl. 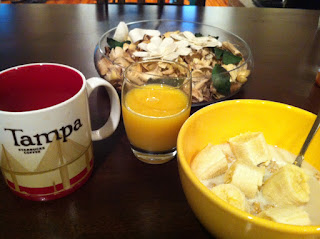 Served alongside a glass of orange juice and some coffee ... the mug was full prior to taking the picture.  I definitely needed the full mug after waking up before sunrise :)