Yesterday was a fun filled evening for the Chalmers.  I tagged along with Ryan while he participated in the 5th annual Charlotte Runners Irish Beer Mile.  Each runner was responsible for drinking 4 "12 ounce" cans of beer and running 1 full mile. 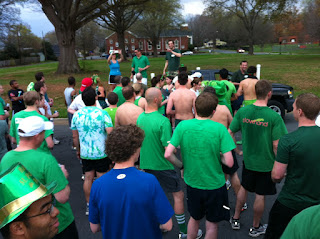 There were about 60-70 participants, mostly males, who were ready to chug beers and race. 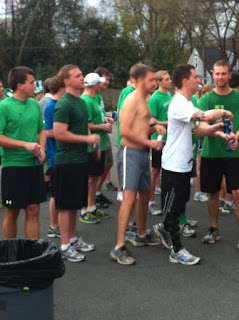 Participants had to chug 1 beer at the start of the race, then run 1/4 mile to the next station where they would chug the next beer, run the next 1/4 mile, drink another beer, run another 1/4 mile, chug the last beer, then sprint 1/4 mile back to the finish area. 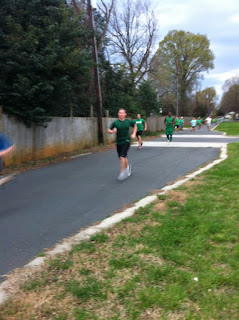 Most of my pictures were blurry of Ryan ... he was just too fast :)  The winner of the beer mile completed the race in 6:41 minutes.  Not only is that a really fast mile time but an impressive time for chugging 4 beers.  Ryan's time was around 10 minutes.
Once the racers were done we walked back over to Philsopher's Stone (where we had parked).  It had started raining at this time so Ryan and I jogged back for part of the 1 mile walk.  I have no idea how long we kept it up but that might have been my last jog before Baby C's arrival.
Our next stop after the run was to get dinner.  I had wanted to try a burger from Mr. K's Soft Ice Cream Shop for awhile and figured last night was the perfect opportunity.
"During an age of turbulence and activism called both “The Summer of Love” and “The Long, Hot Summer”, Mr. K’s Soft Ice Cream opened it’s doors for the first time in Charlotte, NC on August 13, 1967. The San Francisco based hippie counterculture was converging globally for peace, thousands of American solders were halfway around the world fighting for democracy, and Mr. K was serving up the finest Burgers, Hot Dogs, and Milkshakes in the south." (from their history tab) 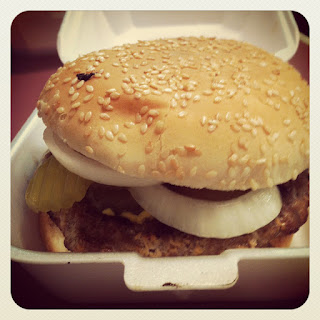 I ordered the 1/3 pound burger with cheese and added pickles, onions, ketchup, and mustard.  On the side I had the onion rings.  Ryan ordered their special, the Tex Mex burger with a side of french fries.  There were only 2 people ahead of us in line when we got there at 8pm.  The service was slooooooow, but very friendly.  Once the food came out I practically ate it in 3 bites and asked Ryan why I didn't order the 1/2 pound sized burger.
The burger itself tasted good ... reminded me of grilling out on a summer's day OR a burger from Burger King (flame broiled goodness).  The sides were slightly disappointing; they weren't terrible but I wouldn't rave about how delicious the onion rings or fries were.
All in all I would probably go back for another burger someday, but wasn't super impressed.
Posted by Jess at 11:24 AM