When Ryan and I lived in uptown Charlotte we would walk over to Alexander Michael's all of the time.  It was THE neighborhood pub/restaurant and was only a few short blocks from our apartment.  All of the times that I had been there I never ordered their burger.  Correction, I ordered their veggie burger once and was very disappointed but have since noticed they have updated their veggie burger and now make it in house instead of from a frozen patty.
From their website:

A locally owned and operated American Tavern in Charlotte's Historic 4th Ward serving fresh unpretentious food that is prepared well with fresh, quality ingredients. We offer a wide selection of craft, imported, and domestic beers as well as a full bar and a modest wine selection.
Please come when you can.

Anyways last night Ryan and I met some friends over at Al Mike's (what the locals call it) and I decided to finally order the burger.  For $8 you get a half pound burger with 2 toppings ... I chose American cheese and bacon, and a side ... I picked a salad with cucumber dill dressing. 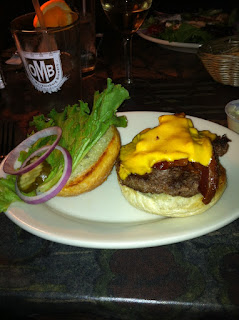 The burger was good.  I would've preferred the meat to be more seasoned but if you're looking for a meaty tasting meal this is it.  The bun was a little bigger and heartier than I would've liked ... I ended up eating the 2nd half of my burger without the bread.  It's definitely a good value in a world of burger boutiques that charge up to $10 or more for what should be a simple meal.
Everyone should visit Al Mike's if they are ever in the Charlotte area.  It's such a laid back neighborhood restaurant where if you go enough times, they really do know your name!
Posted by Jess at 2:21 PM