on Friday November 4th Ryan, Honey, and I headed to Savannah for our big race on Saturday.  We went straight to the Convention Center where the expo was being held to pick up our race packets.  Unfortunately getting to the Convention Center took a lot longer than we had anticipated.  There was a huge back up on the only bridge to get to the center. 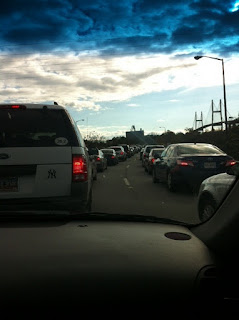 After more than 30 minutes of waiting on this bridge we finally made it to the expo.  We quickly picked up our packets (with Honey in tow ... it was her first expo too) and headed back out.  We had rented a house on Tybee Island (about 25 minutes away) and still had to pick up the house keys.

We kept our meal relatively safe on Friday night and dined at the local Applebee's.  I ordered some pasta and drank lots and lots of water in hopes to be well hydrated for the race on Saturday.  We all tried to get to bed early since our alarm clocks were set to 4am.

On Saturday morning we quickly got ready and walked over to the shuttle pick up area on Tybee Island.  After over 30 minutes of standing in really chilly weather we were finally picked up and headed over to Savannah for the race.
After some more shivering and some minor stretching we all headed to our corrals.  I was in corral 2, since I had ambitiously thought I was going to finish the race in 1 hour and 45 minutes at the time I had signed up.  Once I found out I was pregnant I knew this was no longer a feasible goal. 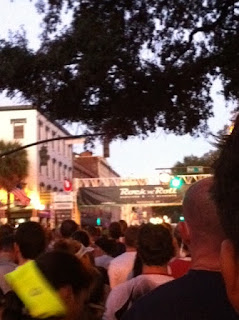 This was the view of the start line from corral 2.  Each corral was on a lagged start and my group set off at 7:31am.

At this point it was still very very cold outside.  I was running in my running tights, a sports bra, and short sleeved running shirt, AND my Northface zip-up.  I didn't take off my sweater until after mile 7 when I had finally warmed up.

The course itself was pretty flat like everyone had said, but definitely had its moments of uphill.  Crowd support was great and really helped keep me motivated.  I managed to run for the first 60 minutes without stopping and after that walked for 2 minutes.  I tried to run at least 10 minutes without taking any additional walking breaks but those last 3 or 4 miles were really tough on me.  I shocked myself (and others) with my finish in less than 2 hours!

After the race I reunited with Ryan who had done so well in the race.  He finished in 1 hour and 44 minutes.  Such a little speedster! 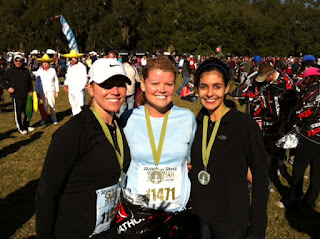 Katie and Carrie did great during the run as well.  We were all pretty tired from the race and ready for a break.  Ryan and I headed back towards the shuttle for a ride to Tybee Island.  The rest of the day was spent lounging around the beach house until it was time to head to dinner.

I'm so glad that I was able to run this race.  Ryan and I had such a good time and look forward to our next half marathon.  Hope Baby Chalmers enjoyed the race as well :)