usually between 11am and 12pm I daydream at work about what I'm going to eat for lunch.  today was no exception.  I knew I would be eating solo at home so the pressure was slightly less to come up with something spectacular.
now before you see the picture of my lunch and start to think to yourself "ewww" give me a chance to explain. 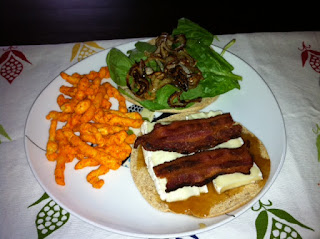 I decided to create a sandwich centered around brie cheese and spinach.  I toasted one of those 100 calorie wheat sandwich thins (deja vu from breakfast) and spread one side with honey apple butter.  On the other side I topped some spinach with some caramelized onions.  The honey apple butter side had some brie and 1 slice of bacon.  What's not to love ... brie, bacon, caramelized onions, and fresh spinach, with an added sweetness from the honey apple butter.  Delicious!  on the side I had some jalapeno Cheetos (a little childish?).
After lunch I took Honey for her midday walk.  It's already in the mid 90's outside and Honey was not a huge fan of the intense heat. 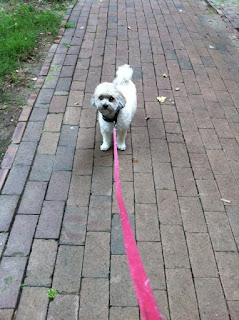 Lucky for both of us she did her business quickly and we scurried back indoors.
Afternoon snack will include some maple bacon ice cream (that I brought to work packed with ice in my lunch bag) and a banana.  Hopefully it'll be enough fuel for my run tonight.
Posted by Jess at 1:31 PM