On Saturday morning Ryan and I woke up around 7am to get ready for our 8am run with the meetup group.  The group of runners met in front of the Smelly Cat Coffeehouse, located in the artsy area called NODA.  I ran and chatted with the organizer of the run, Bevan, for the first 0.5 mile until she mentioned an ankle injury and a slow pace.  She told me to go on ahead and I sped up to catch up to Ryan.  We finished the 3 mile run in 23:30 minutes.

While we waited for the rest of the runners we headed inside the coffeehouse to order some iced coffee.  I chose what was listed as the "Red Eye" which combined shots of espresso with coffee, over ice.  We stayed for a while chatting with the other runners before it was time to head home to make breakfast.

I was craving sweet potatoes (random I know) so I decided to make some sweet potato hash to go alongside some eggs and bacon.  I peeled and chopped a large sweet potato and began to cook it as I prepped the rest of the ingredients.  I chopped 1/4 of a yellow onion and added it to the pan.  Once the potatoes were almost fully cooked, I added a chopped small gala apple.  I seasoned everything with some salt and pepper and a drizzling of maple syrup.  The result was a slightly crunch, sweet and savory breakfast side. 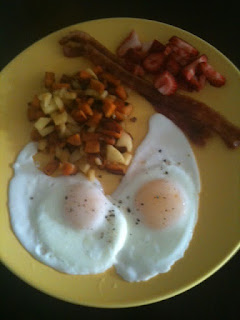 I love cooking (and eating) breakfast and this meal did not disappoint.  It recharged our bodies for a full day of fun.
Posted by Jess at 10:09 AM