last night Ryan and I joined our fellow meetup runners to do a 4.5 mile run through Charlotte.  This is the 2nd time we've run this route and it still hasn't gotten any easier.  at 6:30pm when the run started the temps were still at 95 degrees and it was super humid out.  add some really tough hills to that equation and what you have is a pretty miserable run.
although I felt like crap afterwards I'm so glad I was able to push through and finish that run without stopping or walking.  we didn't even use any music, which made the run that much worse.
originally the plans were to grill our dinner outdoors once we got home from the run, but Ryan was anti being outside in front of a hot BBQ.  I guess I couldn't blame him and ended up cooking our entire meal in the oven. 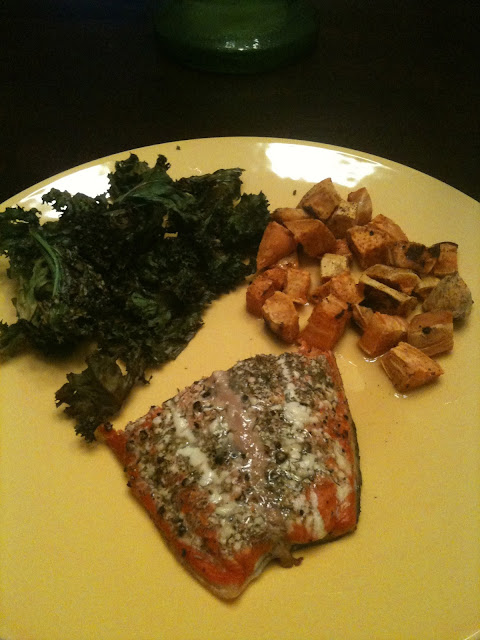 I made some kale chips (seasoned with olive oil and sea salt), cubed sweet potatoes (seasoned with some salt, pepper, cinnamon, cayenne pepper, and a drizzle of maple syrup), and salmon (seasoned with olive oil, salt, pepper, dill weed, and lemon).
It was a pretty tasty meal that hit the spot.  One of the drawbacks of running with this group is getting home around 7:30pm and not having dinner until after 8pm.  As of right now the positives outweigh the negatives so I'll keep going to these meetup runs.  The people that we've met so far have all been so nice!
Posted by Jess at 2:54 PM