Before I talk about my awesome deal of the century, I'll briefly discuss my run today.  I dragged myself to the YMCA to get a run in and ended up surprising myself with a great run.  I ran 4.08 miles in 35 minutes (34 minutes running, 1 minute walking) and even felt GOOD afterwards.

After leaving the gym I headed to the Run for Your Life store in Dilworth to sign Ryan and I up for the CPCC Skyline 5k this Saturday morning.

While at the store I browsed through their sale section and found some Nike running shorts for 50% off.  At only $14 I found this to be quite the steal of a deal.  Check out their awesome 'granny smith apple' green color.  Can't wait to wear these at the race on Saturday! 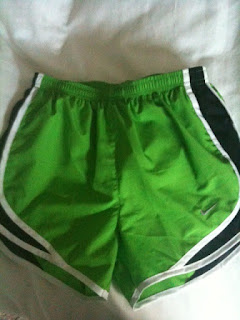 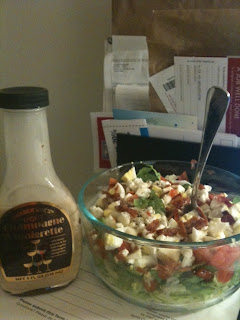 Sometimes your body screams at you and says, "Hey lady how about feeding me something that's nutritious instead of all those quesadillas you've been eating!"  In order to calm down your insides you decide to listen and oblige with the biggest salad you could possibly make.  Don't get me wrong I still found a way to make this salad not super healthy ... 2 slices of crumbled bacon, 2 hard-boiled eggs, crumbled goat cheese, along with a full chopped tomato and approximately 1/2 head of iceberg lettuce, topped with light champagne vinaigrette from Trader Joe's.  It literally took me close to 2 hours to finish eating it.  I grazed over it like a lonely cow on a green pasture.  How's that for poetry?

The large salad definitely filled me up after running 3.6 miles in 31 minutes at the YMCA today.  Now what will I eat for dinner ...
Posted by Jess at 3:41 PM No comments:

Book 2 out of 6 is now finished and back on the shelf ... while at the beach I finished reading "Water For Elephants" by Sara Gruen.  I really enjoyed reading the book and found that the pages went by rather quickly. From wikipedia ... "The story is told as a series of memories by Jacob Jankowski, a 'ninety or ninety-three year-old' man who lives in a nursing home."  It tells of his time working as a circus veterinarian and the people that he meets while there.  This description is of course very vague, but only because I don't want to give away the beautiful and enchanting story.

I'm looking forward to many more sunny weekend days to continue reading more books.   More importantly I can't wait to see the "Water for Elephants" movie with the very handsome Robert Pattinson.
Posted by Jess at 10:12 PM No comments:

one year and counting!

This past weekend Ryan and I enjoyed our first wedding anniversary while lying on the beach at Hilton Head Island.  It was our first time visiting that little town in South Carolina and we LOVED it.  The sun, the sand, the sea ... it was the perfect way to celebrate our first year as Mr. and Mrs.  On Sunday we walked up the beach for 3 miles in a little over an hour.  Gotta love getting in some exercise while on vacation.
I'm so lucky to have married my best friend.  I can't wait to spend many more anniversaries with him ...  and I won't be upset if those anniversaries are spent at the beach :)
Posted by Jess at 9:16 PM No comments:

This was the second morning this week that I woke up at 6:30am to do my work out.  Yesterday we went to the YMCA and I ran 3.8 miles in 35 minutes (ran for 34 minutes and had 1 minute of a walking cool down).  This morning Ryan and I ran 4.01 miles in 35:17 minutes outside.  It was a shock to wake up and see that it was 55 degrees this morning ... last time I checked it was April and the temperature shouldn't be in the 50's anymore!

I didn't feel super great during both morning work outs but I think that's because I'm not used to working out so early in the morning anymore.  The best part of working out before work is getting it out of the way and having the rest of your day free to do other things.  I'm looking forward to Mexican Magic night at our house for the game against the Atlanta Hawks at 8pm.  Then tomorrow bright and early Ryan and I are heading out to Hilton Head Island, SC for a short wedding anniversary get away.  Can't believe it's already been one year of being married to Ryan!

I drank more than 64 ounces of water yesterday.  Exciting, huh?  After the 5th glass of water I was tired of drinking water and wished I had more of a variety of flavors.  Alas I prevailed and drank the suggested water intake for a normal day (according to the Mayo Clinic's website on Nutrition and Healthy Eating).

The water helped quench my thirst after running 3.51 miles in 31 minutes while at the gym.  I also did some weights and focused on my biceps.  I alternated doing bicep curls and hammerhead curls with 5lb weights for 3 sets of 12 reps each.

Today Sue lent me some of her "MiO" drops to flavor my boring water.  The flavor was fruit punch and it tasted like an adult's version of Kool Aid.  Not too shabby and definitely made me enjoy my 16.9 ounces of water a lot better.

I like to give myself silly, but attainable goals.  You know just to keep my life full of purpose.  Today's goal was to consciously drink 64 oz of good ole H20.  Although I like to think that I drink enough water daily, there is a good chance that I don't get all the necessary fluids I need.
Yesterday was my first day back into the gym in over a week.  I ran 3.36 miles in 30 minutes and even found some time to do a quick weight work out.
I hadn't worked out shoulders in a long time and they were definitely feeling it!
Posted by Jess at 1:03 PM No comments:

here are a few of my favorite snapshots while in the big apple ...

There was a time when I would get excited about spending my Sunday brunching with friends and sipping mimosas al fresco.  My, how times have changed ... today I'm anxiously awaiting playing a round of 18 holes of golf with the boys at a golf course in nearby Concord, NC.  I haven't played in weeks ... maybe even a month or so, so I'm curious how terrible I'll be.

The high for today is 68 and sunny and I cannot wait to bask in all of the sunshine goodness.  Let's see if I actually keep track of my strokes today; usually they add up too high and I quickly ignore jotting the two digit score down.
Posted by Jess at 9:48 AM No comments:

... since I last ran.  I was in NYC for Karen's bachelorette party and excused myself for 30 minutes to head down to the hotel's gym last Saturday.  I ran on the treadmill for 27 minutes and finished 3 miles while listening to Jay-Z's "Black Album."

I returned home late Monday night (I guess 2:30am should be considered Tuesday morning) after ensuing chaos at JFK airport.  When I awoke Tuesday morning Ryan's first words to me were "Get dressed.  I'm taking you to the clinic."  Instead of getting better and leaving my sickness from the previous week behind, I ended up developing a bad case of bronchitis.  After sitting in the clinic for an hour I walked out with 2 prescriptions and a doctor's note to excuse myself from work and "sports."  I guess no running for awhile.

After phoning Charlotte running company I was able to defer my entry for Charlotte Racefest until 2012.  Even by Friday morning I was still considering running the race.  My common sense, or I should say Ryan, suggested passing up on the run this year and focusing on my health for once.  I obliged, but not after putting up quite the pout-fest.

This morning I woke up while Ryan got ready for the 10k and was still pretty bummed at the thought of missing this race.  The rain from the night before had continued this morning so at least I didn't have to worry about running 6 miles during a downpour.  I took my morning off from racing to head to Trader Joe's for breakfast materials instead.  I made homemade waffles, applewood smoked bacon, and eggs over easy for my speedy racer and I.  Ryan placed 7th in his division and finished the 10k in 48:12 minutes.  That's my boy!

I'm looking forward to resting up the next 2 days and working out on Monday.  Next race on the horizon is a 5k on April 30th.  Let's hope I'm ready.
Posted by Jess at 2:46 PM No comments:

It's been almost one full week of being sick.  Gross.  I'm so over the hacking coughs and constant blowing nose.  On a positive note I finally went back to the gym after a long sickly hiatus.  Not sure if it was the wisest decision, but it was good to get some walking/running in on the treadmill.
I tried to take it easy and figured 3 minute intervals was a safe bet.  I didn't cough the entire time I was on the treadmill, but definitely had a coughing fit in my car.  I also made sure to thoroughly clean off my treadmill with the sanitizer solution provided at the YMCA.  Germ free zone!

I'm looking forward to heading back to the gym tomorrow and increasing the running to walking ratio.  I only have 2 more days to run before heading to NYC for Karen's bachelorette party on Friday morning.  Who knows, I might bring my sneakers with me for some running at the hotel.
Posted by Jess at 3:51 PM No comments:

I absolutely hate getting sick.  I'm fortunate that I have the option to work from home so I've been cooped up in our guest bedroom, literally working from bed.  Wednesday had some sniffles, Thursday brought on a sore throat, and today I can't stop coughing.  I kept myself up all night from the constant coughing so I'm pretty beat.  I haven't been outside in days and I feel like I've become a recluse.  Poor Ryan has been trying to stay away from me to avoid getting sick.  Hopefully he stays healthy and I can kick this cold soon.

Time to blow my nose and drink some more juice ...
Posted by Jess at 11:00 AM No comments: