When I get Honey's food ready (which means just pouring dog food into a bowl and drizzling some tap water on it) I always tell her "come get your nom noms."  Not sure why I started using the phrase "nom noms" to describe food or snacks but it works in the Chalmers household.
Today I decided to track everything that I eat on here.  I will try to include pictures but I have already failed in that task by not taking a picture of my coffee or orange juice this morning.  So we'll proceed with the rest of the day ... 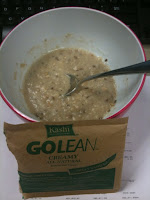 At around 9am I made myself a bowl of Kashi GOLEAN Hot Cereal Creamy Truly Vanilla.  It wasn't half bad.  After checking out the website I saw that there is another flavor, Hearty Honey Cinnamon, that sounds delicious.  This breakfast option seems really healthy and only has 150 calories and 2 grams of fat.  Out of the 25 grams total carbs, 9 of them were fiber.  Plus it has 9 grams of protein!
I opted to bring this to work with me instead of making breakfast at home since Ryan is out of town and I really don't like cooking for just me :(  so sad.  Plus we were pretty lazy this morning (Honey and I) and I was running late for work. 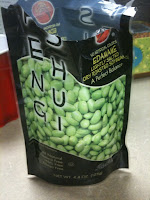 Around 10am I got the munchies again and had some more snacks.  I tend to eat something small every 1-2 hours.  I enjoyed an apple (sorry no picture) and had some edamame that had been dry roasted and lightly salted.  I really like these "nuts."  Each 1/4 cup serving has 130 calories, 4 grams of fat, 9 grams of carbs (7 of which are fiber), and 13 grams of protein. 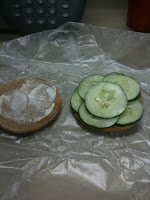 Now that it's past noon it's time to eat part of my lunch.  I decided to switch it up from the usual peanut butter and jelly sandwich to a reduced fat cream cheese and cucumber sandwich on Pepperidge Farm's deli flats.  At 100 calories and 1.5 grams of fat per serving, these deli flats have become my go-to choice for sandwiches. 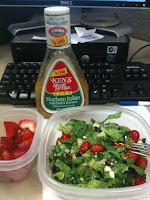 I'm convinced my stomach is set to some invisible alarm clock that goes off every 2 hours ... the clock says 2:30pm and I'm a salad.  I used romaine lettuce, grape tomatoes, cucumbers, Spanish olives, and Gorgonzola cheese.  The dressing is some sort of vinaigrette called Northern Italian with basil and Romano.  It's pretty delicious.
Along side is my next snack ... strawberries.  I decided to bring them to my desk along with the salad to save me the walk to the break room where the refrigerators are.  My legs are still sore from plyo on Tuesday so I've been avoiding extra walking/moving/breathing.  So I'll probably chow down on those around 3:30pm.
And that my friends will bring me into late afternoon/early evening where I'll head home to do 1.5 hours of P90X yoga.  Can't wait.
Posted by Jess at 2:34 PM